[Gothic BC] Revisiting the Reason I Started All This

Originally I started taking pictures at the clubs in order to have source images for drawings and paintings. I let myself drift away from that and the photography became a thing of its own. Nothing wrong with that, really, but there remains something more satisfying about one hand-drawn image that 10,000 digital pictures can't touch. 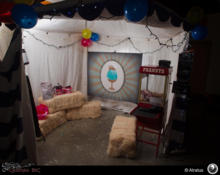 Last Friday I shot at Beerlesque. The set-up I was given was inside a white tent. I have to say this ended up being a real pleasure to shoot in. Instead of shooting with an umbrella or a soft-box, I ended up using the tent itself to bounce the light around. Basically turned the thing into a people-size lightbox and loved it, and am really happy with the results. 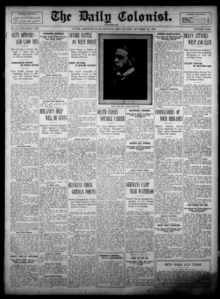 • Three British cruisers sunk by a German submarine in the North Sea, 1,460 dead.
• German use of electric searchlights detailed
• [The "Evil subhuman Huns" propaganda machine is in full swing]
• Genuine signs that things are serious...
• Ads that caught my eye.

Opening and installation shots from "Rodney Graham: Torqued Chandelier Release and Other Works"

When Hiring a Photographer

When hiring a photographer it isn't just the time shooting you are paying for. It isn't even just the usual list of equipment costs, post-processing time, experience, education, etc. There are sundry other things that are never mentioned:

Yesterday one of my photos from the "Belle Epoche" shoot with Gabrielle for Art of Adornment was the social media feature of Gothic Beauty.
[ read more... ]

Everything You See is a Composite

Your eyes don't work like you (likely) think they work. As you look at the world your eyes and brain are constantly adjusting to different light levels, different light temperatures, changing the focus, and ignoring lens distortions and other anomalies.

A portion of my "day-job" photography involves making images of art installations at the gallery where I work and affiliated galleries where we participate in presentations. What I do to make these images look "right" goes unnoticed, because it's designed to. I only want you to see in the image what you would see with your eyes in the gallery. However, doing that with a camera is not as straightforward as point-and-shoot. 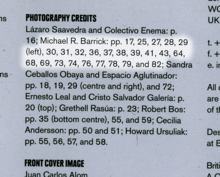 I do love me a good publication photo credit. Look at all those pages! 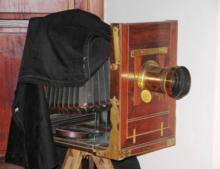 I was working on a scan I made from a large-format 8" x 10" positive today and it got me to thinking about the "resolution" of large-format film. Depending on the grain of the film an 8" x 10" negative/positive original has a "native resolution" of somewhere between three and seven GIGA-pixels, in rough terms. Food for thought...﻿