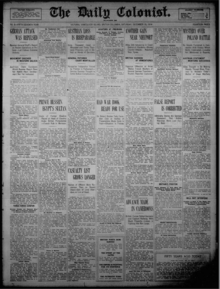 The freaking-out over the German shelling of three English coastal cities is now over, and the news has returned to "normal". The news from the western front is the same—fighting near Ypres, British ships shelling the coast, all with gains and losses measured in yards. Meanwhile on the eastern fronts the news from Germany, Austria, Russia and Serbia is full of contradictions, with both sides claiming victories. The interesting news from abroad is what was exotic in 1914: technology, the Ottoman Empire and the Middle East, Africa, and the Far East. There are also some local stories "today" that are interesting.