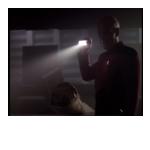 Let's consider light and energy... The mass of an ordinary incandescent light bulb is between 67 and 75 grams... really nothing compared to the mass of a meal on a plate or even a cup of Earl Grey tea (hot), but let's go with the lighter end of that... 67 grams. A wildly inefficient 20th century 100 Watt incandescent light bulb (so inefficient that they are already illegal here in the 21st century) burns through about 100 joules of energy a second. Now, let's say we're on the Enterprise-D and are going to replicate one for a history lesson. 67 grams, using E=mc² works out to about 6.02166e+15 (that 6 million billions, kids) joules of energy, and that's assuming the replicator is 100% efficient. In order to replicate our 67 gram history lesson, we've used enough energy to power that same bulb for 1,908,149 years. Put another way, that's roughly enough energy to power all of current-day Nevada (including Las Vegas) for well over a year. Picard's tea, cup included, has a mass about 7-10 times that. And they're really going to be arsed to turn the lights off to "save power"?