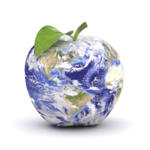 If the world were reduced to the size of an apple, the crust of the earth—the solid ground and seemingly immutable mountains that we take for granted—would be thinner than the apple's skin. Below that, a seething sphere of liquid rock diabolically roiling at a searing 1,000 °C (give or take 300 °C.) In reality our "solid ground" is the pudding skin on fiery death. When it skids a tiny bit or slight wisps of nearly nothing breathe through, these are the disasters that level cities and the magically minded point to as the power of omnipotent gods. Every once in a while a reasonably significant pin-prick will happen unleashing a volume of liquid like a shiny sequin on our apple-earth that shimmers for a moment before it dries and fades and becomes just another piece of crust. These are extinction events.

And here we sit, sacks of fluid ourselves, held together tenuously by our own easily punctured skins, all our lives just one poke or bump away from death, floating on a ball of molten doom itself one tiny poke or pop away from killing us all, surrounded by an infinite universe that is consistent in nothing else but its infinite inhospitableness to our existence. What incompetent and impotent god would create such incapable creatures and with pride place this favoured creation in such a predicament and still expect or care about the slightest thanks?