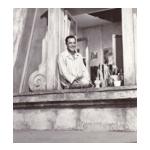 In New York, Lise, being young, pretty, French and experienced with perfume sales, easily lands a job at the perfume counter of a major department store. They have a dingy walk-up loft in the Village, not much larger than what Jerry had in Paris, paid for by Lise. Jerry’s trite Belle-Epoque streetscapes, being stylistically 50 years behind the times, meet nothing but ridicule. He becomes angry and despondent, and takes up spending his nights in beatnik bars where he acquires an intravenous morphine habit.

Lise grows increasingly disenchanted with Jerry’s nocturnal drug use and habit of sleeping all day while she is at work. She begins to date a young beat-poet, a friend of Jerry’s, behind Jerry’s back, repeating the pattern she established with Henri and Jerry in Paris, and eventually leaving Jerry for the, in her eyes, more promising poet.

Jerry spirals further downward, moving from morphine to heroin. He constantly laments how much better off he would have been in Paris if he had stuck with Milo in Paris. At least then, he rationalizes, he would be married to the boss’ daughter and have a job in sun-tan oil.

Jonesing for smack and angry with himself for choosing Lise over Milo, Jerry attacks a canvas and creates an action-painting of Venus de Milo, throwing cigarette ash and other detritus from around the loft into it [similar to Willem de Kooning, but darker–Willem de Kooning + Francis Bacon, with a touch of Jackson Pollock], throwing the canvas aside when he is done.

Later that day, he picks up a beatnik chick that he charms by talking himself up as a painter, really only interested in the fact that she has some smack. He brings her back to the loft [there is in eviction notice on the door] to shoot up. As she drifts away she is looking at the painting, which she becomes enamoured with. Jerry says it’s just a piece of shit that he knocked off, but see protests that it the most brilliant thing in the room and asks if she can have it. Jerry waves her off, telling her to take it, take whatever she wants, it doesn’t matter.

The beatnik chick shows the painting to a curator, who includes it in a show. She drags Jerry to the show, and he is furious and causes a scene. The outburst and the painting catch the attention of an influential critic [Clement Greenberg/Harold Rosenberg], resulting in an article that creates a buzz around Jerry Mulligan.

In a dénoument wrap-up Jerry is pushed into do more similar action painting by the beatnik chick ending in montage of a successful solo show before the final credits.

In a post-credits easter-egg, Jerry and the beatnik chick are driving drunk and whacked-out in celebration and are killed in a car crash.