[Gothic BC] The Gothic Shoe Company 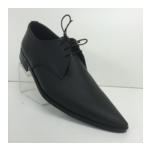 Today is Chinese New Year's day today, and it's happy shoe day for me. On January 3rd I ordered a pair of classic winklepickers from The Gothic Shoe Company of Essex, England, and they arrived today. These are hand-made shoes so the five weeks for delivery is not just the shipping from the UK to this, the western fringe of the old Empire, but the time to make them to order. Because they are made to order they will do custom work, but for a first order I chose to go with an "off the rack" and simple style.

As someone from British Columbia, my go-to for goth shoes since before I moved to Vancouver in 1990 has always been Fluevogs, so that is going to be my baseline for comparison. To spare you the details that follow in the unboxing below, here'e summary: these shoes compare favourably to the near mythical Canadian and English made 'Vogs of the late 80's and early 90's in quality, and at somewhere between one half and one third the price of the vastly inferior, only occasionally available, not custom, made in Whereverischeapistan, green-washed 'Vogs of today (Oh, sorry. Did I forget to edit that?)

Even though I'd been expecting the shoes to show up any day now since I got the the "we've shipped your order" notice on January 25, it was a bit of a surpise when Canada Post buzzed up this morning before I clued in that today's "Family Day" statutory holiday is provincial, not federal, so the poor bastards have to work... and huzzah! A shoebox with a Royal Mail shipping label!

Cutting into the plastic wrapping I was greeted with the most amazing smell of fresh leather and shoe polish. It may be a bit weird, but before I even laid eyes on them I was already impressed?these were the best smelling new shoes I've encountered in years. This is a testament that they really are made to order and haven't been sitting around in a warehouse getting stiff and dry for months or years. And the box had this hand-written label: I'm pretty sure that what looks like "WD" is actually "WP"—winklepicker. And that is an English size 10, not an American 10. Once upon a time shoes in Canada were always sold with English sizing, but now you never quite know and I've been caught in this trap before. This would be an American 11. My general advice is it's almost always safer to know your European size (44 in this case) and look for a sizing chart when buying shoes on line. Now, on to the shoes. Check out that address. "Gallows Corner", now that's GAF! And while "The Parade" to "Gallows Corner" conjures up some properly gothic images of rogues being marched to their death, the sad reality revealed by Google Earth being that it is a dismal industrial park at the cloverleaf intersection of two A-roads. That the nearby McDonand's is labelled "McDonald's Gallows Corner" amuses me, though. Nicely packed in tissue against scuffs while shipping, for what that is worth. And the tissue will be pleasing to the cat that will inevitably seek to inhabit the box when the shoes are out. And here it is. My one, very minor, gipe is with the laces, which aren't as pictures and aren't dress laces. I'll be swapping those out as soon as I have a chance to pick some up. But laces are nothing. The leather in these is everything hinted at by the smell earlier. It's thick, much thicker than any 'Vog, Aldo, or other shoe you'll find in a local shop for less than $450, but at £64.99 these work out to less than a third of that, even with the shipping. But despite the thickness, the leather is fantastically supple because these shoes have not sat around in some factory warehouse. When I put them on it was immedately apparent that there would be no painful breaking-in period. The leather is so good that they "broken in" right out of the box. Amazing, really. Looking closely you can see the quality of the leather and the stictching. And look at that sole! It's a good four times thicker than what been under pointy 'Vogs lately, if and when they feel like putting out a pair that isn't hideous. These I'll be able to go out dancing in more than once and wear as everyday-goth shoes for more than week.

Can you tell yet that I've been completely offed by the craptastic lack of decent goth shoes for a while now? No longer—in The Gothic Shoe Company I've finally found the shoes I've been missing for years.