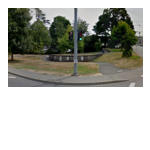 In this tiny park in Nanaimo, which is actually the site of Nanaimo's original cemetery and called "Nanaimo Pioneer Cemetary Park", is the only grave on Canadian soil of a casualty of the Crimean War of 1854-56. The didactic plaque embedded into the wall reads:

"From 1853, here in the forest outskirts of the first settlement were buried many Nanaimo pioneers. Few headstones remain. This honours them all. An unique burial occured October 10, 1854, of Samuel Sargent, stoker, who died aboard H.M.S. Virago in Nanaimo of wounds received from the Crimean War - probably the only such casualty buried on Canadian soil."

The park near the corner of the Island Highway and Comox Street, specifically at the corner of Wallace Street and Comox, just across Comox Street from the Tally-Ho. If I remember correctly the headstone of Mr. Sargent is on the inside curve of the memorial wall. Mind you last time I was in the park was about 25 years ago so I could be wrong. Maybe someone in Nanaimo can have a look.