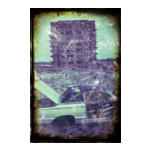 Thinking this was all rather neat, the aliens went back home to report in on what they had found. Word got around on the aliens' planet, especially that we earthlings would trade what to the aliens was some pretty damned cool, exotic stuff and really amazing food for what to the aliens was just cheap crap. Other aliens came back to make more trades, sticking pretty much to the same area the first bunch landed. Most people on Earth didn't even know they had been here at all.

Unfortunately for the locals, the visiting aliens had also inadvertently brought some new, rather nasty diseases with them and the people they had been trading with start dying off in droves. In fact, the aliens had introduced not just one disease, but several that are pretty devastating to the poor people that they were trading with, and they were all contagious and spreading.

Pretty soon alien traders coming back were surprised and confused to find the people they have been trading with were just gone. At this point most people on Earth had no idea about the aliens, but the diseases were big news. They'd spread everywhere and people were freaking out.

Meanwhile, the aliens, not sure where their trading partners had gone started landing in different places, looking for new people to trade with. Other aliens decided to set up bases in some of the empty areas devastated by plague and have people come to them for trade.

By now the news about the aliens is out and everybody knew about them, but reactions varied. Our own trade networks were breaking down and economies were starting to collapse. It was chaos. Some people tried moving into more and more remote areas to stay ahead of the plagues, others moved closer to the aliens and became dependent on their trade just to get by.

And really, the aliens are a lot like us in many ways, not the least of which being that they had been fighting among themselves over all sorts of stupid things. Some of them who were getting the short end of the stick in these conflics at home came here hoping to find a place where they'd be left alone. With this influx, the bases turned into full-blown colonies, but there wasn't much we could do about it, the plagues had killed off too many people and left us too disorganized. It had gotten so bad for us that wars even broke out over trading rights with the aliens. And in those wars people even went so far as to use the alien plagues as biological weapons against other people. It was messy.

Meanwhile, different factions of the aliens began fighting over who got what part of Earth. Some of the nastier factions came here in force to take over whole areas and subjugate the people. The plagues and wars left all the old cities either deserted or completely taken over by aliens. In just a couple of lifetimes nearly half the earth was under direct control of two alien factions. The surviving people living in those areas were mostly people that were living outside the cities, mostly farmers. They kept on farming and trading food and other forms of labour to the aliens to survive. In short order they wound up pretty much assimilated to the alien culture. They were speaking the alien language, following the alien religion, and whatever remained of human culture was looked at as quaint old folk traditions.

Back on the alien home-planet, the two factions that took over half the Earth were causing other alien factions to get very nervous. The other factions started colonising the other half of the Earth in earnest lest they miss out entirely and wind up conquered by one of the two big factions. On their own world they went so far as to conquer yet other factions of aliens and send those aliens here. They went to other planets they knew about to outright kidnap other aliens to bring here as labour. The power struggles on the alien planet caused unimaginable wars to break out among the aliens.

About 350 years since the first alien visits, the alien wars were starting to make a real mess of the alien homeworld. Aliens started coming here by the thousands, just to try and get away from the wars and live in peace. So many humans were wiped out by the plagues and the aggressive alien factions that the population was a mere 10% of what it had been before the alien plagues took hold. Some humans are still trying to resist, but they are hopelessly outnumbered now. The ruling aliens are used the refugee aliens against us, using their fears of the alien wars and the more oppressive alien factions to encourage them to come here and join their colonies so the ruling factions could lay claim to more of the Earth and defend those claims against the other alien factions. The few humans left are forced to make horrible bargains to prevent being wiped out, like allowing our children to be sent away to alien schools and taught only the alien language and history.

By the 2400's the aliens controlled every corner of the Earth. They were telling us where we are allowed to live (which is pretty much only where the aliens don't want to live.) They were telling us that all the resources of the Earth are theirs, not ours, and expected us to be gracious and grateful for whatever scraps they threw our way. The Ruling Aliens had the aliens from conquered factions and other planets that were brought here against their will and those came here trying to escape the wars so brainwashed that even if we tried to help them, they fought us. The Ruling Aliens used them as labour to extract resources that by the late 2400's were mostly sold to those Other Aliens, the ones that those first traders were going to trade with in the first place, when they landed here by accident.

Now, in the early 2500's, the Ruling Aliens are so blinded by their own greed that they are selling parts of the Earth to the Other Aliens. Many of the aliens that came here to escape oppression and war on the alien home-world are, without even knowing it, are really just another resource (labour), sold to the Other Aliens along with the physical resources of the Earth.

Now it is 2513 and here we are. Those of us that survived the plagues are immune to them now. Because we were forced to learn the history of the aliens we learned how some of the alien factions conquered by the ruling alien factions fought the ruling factions, sometimes for centuries, and we have seen some of them regain partial or complete independence. We're getting organized. We're using the rotten agreements we were forced into to survive to block the Ruling Aliens from selling the resources of the Earth to the Other Aliens to the detriment of us and the aliens that came here to be free of the Ruling Aliens' oppression and war. Some of the descendants of refugee and kidnapped aliens are also resisting. Also, over all these years there has been a fair bit of interbreeding and it's near impossible to draw a clean line between “us” and “them”—and yet it is crystal clear who is for the Earth and wants to live in peace vs. who is just out to rape the Earth and use the resources and inhabitants, human and alien alike, for their own profit.

Now subtract 500 years from all the dates. “Earth” is North and South America. The “Aliens” are Europeans. I leave it to you to fill in the rest.