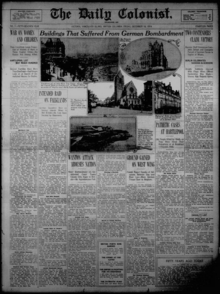 News of the shelling of the English coast dominates the front page again, but not as entirely as yesterday. Other news includes news from the Russian Front, details on the recent naval battle off the Falkland Islands, news about Egypt, and some local war-related news. There are also a couple conservative editorials from this day in 1914 that are completely relevant today that put what the Conservative Party of Canada and Tea Party Republicans try to pass off these days as "conservative" to shame. 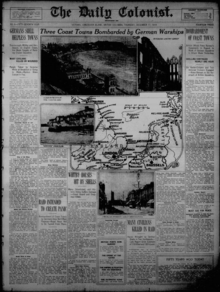 BIG deal today: "For the first time in centuries, England has been stuck by a foe." German ships shelled the English ports of Scarborough, Whitby and Hartlepool yesterday. The entire front page is devoted to it, with pictures of the three towns, including the famous Whitby Abbey that was the inspiration for Carfax Abbery in Bram Stoker's novel Dracula.

Other news includes: Liberia breaching neutrality, news from the front, Ottoman outrages, and local business promotion that is even more relevant today than it was a century ago.