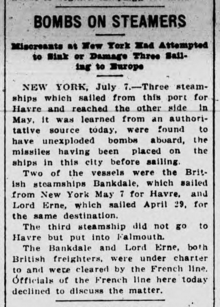 There are several interesting things this week including, terrorists in New York, a renewed German offensive, the fall of German Southwest Africa, the reply to the American note on the sinking of the Lusitania and the expansion of Canadian forces as the casualty list rises.