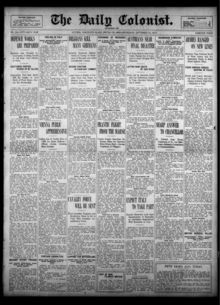 News from the European fronts continues to be more of the same. The Germans are in retreat and the Austrians are in disarray. Most of the news is about the German push toward Paris being a failure, but no real details and virtually nothing new since yesterday.

Would you believe it's been 30 years?

Cross-posted from my blog on Gothic BC What's wrong with this picture?

I was in a mood to hear something I hadn't listed to in a while and pulled my old Generation X albums out. This stuff kicks ass!