The general buzz this week is on Russian advances in the Carpathian Mountains. The articles are all short on specifics, even in comparison to the heavily censored news from the Western Front, as all the news from the Eastern European theatre seem to be, so none of them were really worth "clipping". Suffice to say that the Russians have advanced through at least two Carpathian passes into Hungarian territory. The more interesting articles and advertisements from this week follow: 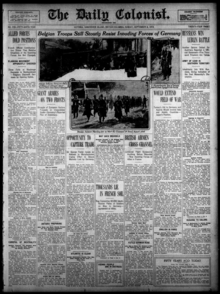 News out of Victoria, British Columbia, 100 years ago today. A slow news day, but as it is the Sunday edition with the magazine section there are still a lot of interesting things. This post also features several lovely illustrations that ran with the ads in the paper.