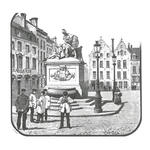 A few weeks ago I was reading about a meta-study that looked for patterns in MRI data from multiple studies. They discovered something that explains a lot, IMHO. As brains age, the way they work changes. Young, healthy adult brains show activity in multiple areas when presented with new information. Multiple pathways connect across multiple areas literally thinking differently about the same thing at the same time. As brains age thinking becomes more distributed and monolithic. This has some advantages in that once a thought is engrained and distributed it is harder to lose it to minor damage. But it comes at the expense of it being harder to change an engrained thought based on new information. Good physical health and continuing to learn slow down this process. Basically, without attending to it, people will get stuck in their ways, literally, with their brains physically set into a way of thinking that becomes nearly impossible to change. It becomes increasing difficult to recognise contradictions, connect disparate ideas, learn new things and adapt to change. It isn't news that old people get stuck in their ways and it happens to some people sooner than others. What's interesting is looking at what is physically going on.

Outside of this analysis, but interesting in connection with it, is the existence of what are called "cognitive super-agers"—octogenarians, nonagenarians and centenarians that are still as sharp and mentally flexible as normal young adults. There is interesting stuff about these people. For one, their brains quantitatively show less age-related shrinkage over time. When we did a show at work of the drawings of Santiago Ramón y Cajal, a pioneer in neuroscience, I shot a series of short talks by several post-graduate neuroscientists and had some interesting conversations with them. One recurring theme was the idea of "use it or lose it". Weirdly, cognitive super-agers often have structures associated with Alzheimer's showing up in their brain scans. There is something super-weird there. In an article I read on cognitive super agers, Dr. Claudia Kawas, M.D. of UC Irvine explained, "You can super age by not getting Alzheimer’s pathology, or you can super age by getting it and somehow managing to not get sick with it."

Bottom line is, I often joke about being "a fountain of useless information" (an appellation stuck on me by my 10th grade Social Studies teacher), but it is a strength. Not only does is give me a deep well to drawn from to solve weird problems, but the very act of doing that and keeping that reservoir topped up with new information is exactly how to keep a brain young.

[ And, tangentially and as a case-in-point, "fountain", "well" and "reservoir" are not a mixed metaphor. Before pumps fountains were fed from reservoirs above the level of the outlet of the fountain, i.e. the same principle as an artesian well. ]