A Bird in the Hand? 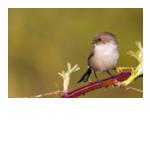 I literally caught a wild bird in my hand this morning. That doesn't happen every day.

I sat down at my computer this morning and out the window in front of me a small bird (bushtit, I think) was zooming at the bird-net I have enclosing my balcony. Primarily it is there to keep the cats *in*, but has the bonus functions of keeping crows from stealing from my cherry tree and ensuring the cats are safe from unlikely-but-worth-worrying-about rabid bats.

My first though was, "What is this guy trying to get?" because he was pretty clearly looking for a way through or around the net. After a few attempts he retreated to a nearby tree for a second. At this point I noticed that the net was moving despite there being no wind. My heart sank a bit; one of these little birds must be caught in the net. I remembered the time Tharsis somehow managed to catch one on the balcony of the old place and brought it inside as a not-quite-dead toy/prize and I had to take it from him and kill it myself. Before I looked I imagined some poor little bird tangled up enough to have already broken a leg or wing.

Going to the balcony door, sure enough, there was a bird. Fortunately she was not tangled in the net, just on the wrong side of it. She was pulling on the net with her little birdy-feet. Not tangled, just clutching. With a sigh I though, "OK, I have to catch this bird before that cats notice."

I went out and approached her. Naturally she freaked out. Her partner on the other side of the net was zooming around again. Obviously he wasn't too keen on me being there either. Fortunately for both of us, she was trying to escape through the net rather than letting go and flying around the balcony. I was able to walk right up to her. "I'm going to get bit for this," I thought as I went to grab her. She tried. Turns out the skin on the pad of my thumb was too thick for her tiny little beak.

It was weird having hold of this freaked-out wild bird. She weighed nothing (according to Wikipedia about 5 or 6 grams—which is a little more than a quarter, but a little less than a loonie.) My fingers weren't closed, just kind of around her like a little cage that she was flapping madly in. She was so tiny I could hardly even feel her protestations. It was like having a handful of wind.

Lifting the bottom of the net with my other hand I let her out. She and her partner shot away to catch up with the rest of their feeding group, transformed from a bird in the hand to two in the bush.

I turned around to find Vidma behind me, giving me her sternest one-eyed recriminating look for not sharing.