Why Must Tourists Take Selfies 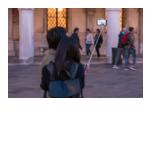 The selfie is a much maligned phenomenon in photography, particularly tourist selfies. Boomers and my fellow Gen-Xers are the to most vocal critics of the form, calling them ill-mannered and narcissistic.

But here is the thing, my fellow grumpy, aging curmudgeons: the intent is no different than the tourist photos we took. When we took photos on a trip with film and before social media and the ability for any idiot to share any photo, simply having a photo of a place that wasn't clipped from a magazine was proof enough that you were there. From the dawn of photography through to the end of the 20th century a print or a slide of some place was something you were unlikely to have unless you were there an had taken it yourself. The odd bad exposure, poor focus or bad composition were actually just further proof you did it yourself. For the longest time even a postcard was enough since you couldn't buy, for example, a postcard of Vancouver anywhere but Vancouver. Clearly you were there if you had one that was not mailed to you.

Now, however, any picture of any place you can think of can be found with a quick search. You can print out an make your own post-cards (not that anyone does, since who actually mails postcards for any reason other than a nostalgic novelty?) There are no Brownie points to be had for having a picture of the Eiffel Tower not clipped from a magazine.

If you were traveling with people you could take a picture of them or get one of them to take a picture of you. Getting a picture all together meant handing the camera to a stranger where you ran the distinct risk of your camera being dropped or stolen and the near certainty that picture would be awful.

Now you can hold your phone at arm's length or out on a stick, see your own composition and get a marvelous picture of yourself and your traveling companion(s) clearly and unambiguously wherever you are without any risk to your gear, with the added bonus of being able to send it to all your friends immediately for immediate feedback. And I don't recall anyone ever complaining about missing politely smiling and saying, "You must have had a wonderful time" while enduring tedious slide shows and dreadful leafing through photo albums.

The motivation behind boring tourist photos has not changed and what you have to politely endure from traveling friends is diminished, so really, selfies are a good thing. Enjoy.