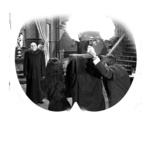 You'll continue to see me at gothic events as a roaming photographer and shooting at concerts and shows, but the time as come to move on from Sin City. Sin City was never a goth event, per se, and now that the event has its own website and there are other photographers regularly working the night it's time for me to, as it were, refocus Gothic BC.