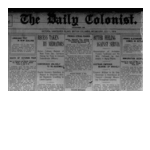 Emperor William to Be Only Sovereign in Attendance at Funeral — General Mourning Throughout Country.

VIENNA, June 30.—Owing to the difficulty of finding accomidations and a desire to spare Emperor Francis Joeseph the fatgue of entertaining foreign sovereigns, the German Emperor will be the the only foreign monarch to attend the funeral of the late Archduke Francis Ferdinand and his wife, the Dichess of Hohenberg, whose bodies are now on the way to Vienna from Sarayevo. The exception was made in Emperor William's favor because of his close personal friendship with the Archduke.

Anti-Servian demonstrations, which began on Sunday in Bosnia, how now extended to Vienna. Three hundred German nationalist students joined in a noisy demonstration here today, they burned a Servian flag, which was flying at half-mast on the Servian legation. The gendarmes had some difficulty in dispersing the students.

Similar demonstrations occurred outside the War Office and in other parts of Vienna. The declaration of martial law at Sarayevo has had the desired effect. The city is quiet, but disporders continue in other parts of Bosnia.

In a situation dramatic in its tensity, the figure of Emperor Franz Josef stands outlined agains the clouded political sky as clearly as an eagle poised on a cliff's edge. Harassed and worried by rumors of plots in Berlin and St. Petersburg, with the Balkans seething and boiling to the south of him, wearied and worn by a reign nearing the traditional three score years and ten, bereft of the well-nigh all those near and dear to him, the old man is still a King.

He came to Vienna yesterday to bury the Archduke and Duchess and rode boldy through the streets in an open carriage. Surrounded by a full staff

of brilliantly uniformed officers, the carriage whirled along, with the Emperor sitting bolt upright, stern and incomitable as always, If this heart was sick, the proud Hapsburg was too proud to show it. The people thronging the streets cheered him until their throats were hoarse, but he looked straight in front of him. He drove straight to Schoenbrunn, where Archduke Charles Francis Joseph, the new heir-apparent, received him.

The fact that he decided immediately after receiving the news of the assissination, to return to Vienna has furnished an example that, the press decares, will force the peoples of the dual monarchy to rally to his aged side. His heroism and the marvelous way in which his iron will has controlled his feelings in such an emergency, have lent a new dignity to an already splendid figure, and he is still a King.

BELGRADE, June 30.—It as offically announced today that the Servian Government is taking measures against suspicious elements in Servia likely to have been concerned in the assissination in Sarayevo.

Bodies on Way to Vienna

METKOVITCH, Herzegovina, June 30.—The bodies of Archduke Francis Ferdinan and his consort, the Duchess of Hohenberg, were brought here on a special train at 6 o'clock this morning from Sarayevo, Bosnia. They were accompanied by the members of the household. The town was draped in black while all the lamp posts where covered with crepe. Flags on all buildings flew at half-mast. Guards of honor from the army and navy here drawn up along the platform, and behind them were gathered the local authorities, the school childred of the town and dense crowd of citizens.

The coffins were removed from the cars by bluejackets, and, after a prayer by a priest, were conveyed, amid the roll of muffled drums and the tolling of the church bells, to the royal yacht Dalmat, lying in the river. They were covered with military flags and wreaths, while on the yacht were hundreds of floral offerings from military and naval officers and civiilians.

As the yacht left, the guard of honor fired a general salute. The vessel was preceeded down the river by a torpedo boat, and followed by the Governor's yacht, on board of which were the members of the households of the Archduke and Duchess. The Governor also accompanied the bodies while they remained in the waters of the territory.

Every villiage and hamlet along the River Narenta was draped in mourning, and their populations, headed by the muncipal officials and clergy, assembled along the banks. the men and women bearing lighted candles and kneeling while the yacht passed. At the same time the church bells tolled and the priests uttered blessings.

When the Dalmat reached the mouth of the river it proceeded directly to battleship Viritbus Unitis, which was lying at anchor waiting to convey the bodies to Trieste. The yacht fired a salute of nineteen guns as she came alongside the battleship. The caskets were then transferred to the after-deck of the Viritbus Unitis, which had been transformed into a mortuary chapel decorated with flags. Here the bodies were again blessed with much ceremony by the ship's chaplain in the presence of the members of the household and the naval officers, while the crew were drawn up in a circle around them.

The Viritbus Unitis weighed anchor at 9 o'clock, and sailed northward with the archducal standard flying at half-mast.

The battleship is proceeding slowly towards Trieste, so as to allow the court officals at Vienna time to make preparations for the funeral.

The vessel will arrive on Wedensday evening and the bodies will be taken ashore Thursday and conveyed on gun carriages though troop-lined streets on their way to Vienna.

LONDON, June 30.—The tragedy that has befallen the ill-fated House of Hapsburg, according to news reading London, was the result of a carefully prepared Servian nationalist plot in revenge for the annexation of Bosnia and Herzegovina, which defeated the dreams and aspriations of creating a greater Servia. The assassins of the Archduke Francis Ferdinand and his wife have confessed that the plot was matured at Belgrade. The terrible event is only another illustration of how well justified is the anxiety always present in the minds of European politicians and diplomats about the unstable conditions prevailing in the Balkans, and even the dual monarchy.

Anti-Servian riots are occurring in various parts of Austria-Hungary, as well as at Garayeod.

Serveral hundred persons, including the Servian deputy, Athanasius Sola, were arrested during the rioting which lasted until martial law as decared. The mod divided itself into several groups, whcih marched through the streets, everywhere wrecking and destroying property of the Servians. Sola was arrested at Nevesinge and charged with inciting sedition.

The rioters consisted for the most part of Moslems of the lowest class. They looted shops, throwing the contents into the streets and invaded private dwellings.