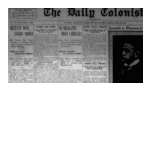 There are undoubtedly a near endless supply of stories out there today about the 100th anniversary of the assassination of Archduke Franz Ferdinand, the event the sparked the First World War. But what was going on here in the colonies? News took a while to get way out here. What follows is the lead story from the June 28, 1914 edition of The Daily Colonist published in Victoria, British Columbia:

SAVED BY POLICE FROM BEING MOBBED

Militant Methods Have Effect of Adding to Anti-Suffragists—Jury's Remark on Miss Hall's Case.

LONDON, June 27.—Suffragettes today tossed several bundles of their literature into a carriage occupied by King George and Queen Mary.

The King treated the incident with good-humored indifference. The King smilingly tossed one of the bundles of papers into the roadway, and the drive continued unchecked.

The crowd showed a different spirit. Quick to resent what was regarded as an insult to Their Majesties, the spectators made a rush for the women, who would have been badly mauled had not the police rallied around them. Two of the women were particular objects of the crowd's wrath because they were most conspicuous in throwing bundles at the royal carriage. They were arrested more for their own protection then for their offence. They were taken to the police station and charged with insulting behavior, but were released on their own recognizance.

The effect of militancy upon public sentiment may be seen in the fact that over 25,000 adherents were reported at today's meetings of the anti-suffrage association. Earl Kedleston, who presided, claimed that the anti-sufferage cause stood in a stronger postition today than it had been for the past twenty years. If the outrages of the militants continued, he said, he was sure public opinion would demand that the convicted women pay the full penalty for their crimes.

Women detectives are now employed on special occasions at the House of Commons. One or two of them are employed by Scotland Yard to sit in the ladies' gallery when there are big debates to deal immediately with any sufffragette intruder. They are so fashionably attired as to be quite indistinguishable.

Miss Hall, the suffragette, who screamed incessantly when she was arraigned in a police court some time ago for the unlawful possession of explosives, when her trial at the Old Bailey was called today was very quiet. She had apparently been subdued by her hunger strike.

The jury found the woman guilty, but recommended her to the mercy of the court because she was a paid agent of others who ought to have been arrested and had similar charges preferred against them. Sentence was postponed.

Miss Casey, the militant who was arrested in Nottingham during the visit of the King and Queen, when she was carrying a suit case containing explosives, was brought to Holloway Jail today to await trial.

When the King leaves London the whole system of protection at Buckingham Palace will be overhauled. There is, of course, no need to panic, but recent events have shown that the palace is by no means as secure as it ought to be. Not only has a man got inside, but the militants have smased a window, and others got across the yards before they were captured. The household, and Scotland Yard as well, hails the removal of the court with profound releif.

The militant suffragettes are boasting of a complete victory over the Government. Not only are there no prosecutions against the subscribers to the militants' fraud, but the headquarters in Kingsway, which were raided and closed by the police a few weeks ago, have once more been opened and the militants there are openly organizing their attacked on people and property.

The militants say it is not altogether the wealth and social influence of the subscribers to the organization which has brought about the victory over the Government. One of the strongest supporters of the militancy and one of the largest subscribers to the fund claims to know enoguh about a certain Member of Cabinet to drive him out of public life, and she says she is resolved to do it if attempts to confiscate the militants' fund or close their headquarters are continued.