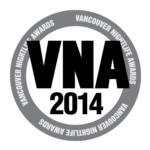 While you are at it, Vancouver Fetish Weekend would be a nice choice for the "Event of the Year". Restricted Entertainment is in the "Best Electronic Promoter" (I had no idea Isaac was a robot, they must have been thinking of Alex). MadH?us is in there for "Best Electronic Night" (a.k.a. "the only category that comes close to applying to anything alternative"). Pandemonium and R_Lex are in the "Best Electronic DJ" category, further solidifying my suspicions that they are both robots and dream of electronic sheep. "Best New Venue" has some good choices, such as Imperial and the Fox Cabaret. Vancouver Fetish Weekend is also up for "Best Festival". As for the rest of the categories... meh, whatever.