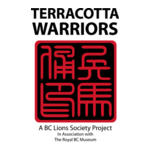 So the latest fugly fibreglass abominations have begun to appear around town and I want to understand this progression: Whales -> Bears -> Eagles -> Chinese People.

O.K., sure they copies of the terracotta warriors, but really what is the relevance of a fibreglass copy of a clay funerary statue of a 3rd century B.C. imperial Chinese soldier?