Remembrance... of the short end of the stick 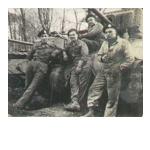 It's Remembrance Day again. In some past years I've made posts about my father's service during WWII (2001, 2003 repost, 2005 repost, 2008) and at other times I've written about some of the horrors my mother and father survived during WWII. And one year I had a few things to say about why it's important to remember war. Let me reiterate and expand on those thoughts:

This is not a day to sing the praises of war. This is a day to remember the horrors of war, honour those that endured them, and in so doing remember and learn that war is not to be entered into lightly. This is not a day to glorify war, this is a day to glorify peace. It was hoped that November 11, 1918 would be not only the end of the World War I, but the end of all war. The creators of wars always claim one noble ideal or another as the motive, but the real cause is and has always been over resources. If there was enough space, food, and energy to go around there would be no war. Each tribe is trying to ensure its own survival. The noble words about gods and ideologies are just ways to delineate one tribe from another. It's a nice ideal to cherish diversity but when the cold creeps in or the food runs out there will always form an "us" and a "them" to fight over what's left. War ends and tolerance of diversity only happens when there is enough to go around.

These days, thanks largely to the overflow of American propaganda and neo-con sensibilities, Remembrance Day seems to have lost all this. It's not only easy to laud the virtues of war when you are the winner, it's also necessary to do so when you are the "us" and you are swinging the "big stick" at "them." The problem is, someone is always at the short end of the stick. There is always the "them." With my white skin and English surname you'd probably assume my family was on the "us" side when it comes to the First World War. It's not the case. My father changed his name. All four of his grandparents came from a village in what is now part of Ukraine, but at the time was part of the Austro-Hungarian Empire. They came to Canada in the late 19th century to find freedom and fortune (and, no doubt, to get away from things like the Austro-Hungarian forced relocation of ethnic Ukrainians in Galacia.) After Archduke Franz Ferdinand of Austria was assassinated and the Austro-Hungarian Empire declared war on Serbia, causing Germany, the British Empire, France, the Russian Empire, the Ottoman Empire and the other powers of Europe to all pick sides and declare war on each-other, what it got them, as former Austro-Hungarians, was declared "enemy aliens." Unlike the Japanese internments in WWII, the Ukrainian interment of WWI is not so well known. The government destroyed most of the record of the First National Internment and it's not something my father ever talked about, so I don't know if my grandparents and great-grandparents on his side of the family were among the 6,000 interned and used as forced labour (building, for example, Banff National Park) or the 80,000 forced to register and report. Either way, even after serving Canada in WWII, it's no surprise my father chose to change his name to something English after the war and moved away from the Prairies when the Soviet Union (containing what at that point was then Ukrainian Soviet Socialist Republic) became the "bad guy." Being ethnically Ukrainian could have easily once again have meant having ones freedom severely restricted or even getting shipped off to a labour camp.

Then there is my mother's side of the family. She's from Belgium. Belgium was neutral at the start of WWII. They were first, technically, invaded by Allied forces. Then the Germans also invaded to fight the invading Allies, at which point Belgium sided with the Allied forces but was overpowered by the Germans. My mother was ten years old when Nazis overran the country. Her family endured hardships. My namesake uncle René fled on bicycle to Free France to avoid Nazi conscription. Her father fought in the resistance and saw comrades sent to concentration camps. Many of my mother's friends were killed by v-bombs. All for the unfortunate circumstance of being in a country that did not want to fight, but was unfortunately caught between the countries at war.

And this, of course, was the same boat Belgium was in during the First World War. Belgium was neutral then as well, but ended up being Germany's path to France. Belgium was occupied. Food supplies were seized for the German army and the civilian population starved. Thousands fled to refugee camps in the Netherlands. My mother's mother was 10 when that war started.

After history repeating itself like this there is little wonder that my mother left Belgium at the first opportunity once the war was over?

Even those that stayed, like my great-uncle Floran (who lived through both wars) never really trusted there wouldn't be another. Even though his position as the mayor-for-life in the small town where he lived afforded him a car and driver as a perk of the office, he kept and maintained a car of his own until he was too old to drive it just in case he should have to flee another war.

I am here because the (mis)fortunes of war drove my parents to this "safe" place.

And my wife's history isn't much different. Like me she is half Ukrainian, and the other half is Scottish. Ukrainian I have already covered. Need I go on about Scottish fortunes at the hands of the English for the last thousand years or so?

So even though my father was a soldier, even though I once upon a time volunteered and said my oath to the queen, even though I carry a Legion membership in my wallet, I remember this on Remembrance Day: while individial soldiers can be noble, armies are the blunt instrument of the state, and they are often used to roll over and cast aside innocents that happen to be in the way of or undesirable to the state; war makes the rich richer and the poor dead; above all war is to be reviled and avoided.

Well put Michael. Will you permission I'd to copy it and and forward to my Usual Suspects. Go right ahead. It's a story to be shared.

I was at the Reina Sophia museum today, seeing (among other things) Picasso's painting "Guernica", which had numerous studies in the surrounding galleries, painted before and for decades after. The horrors of an event from the civil war that Picasso didn't even witness firsthand rode with him for decades.
This evening, there was a slowly shuffling crowd of protesters blocking my way in the Puerta del Sol- it took a bit to decipher the Spanish, but I suddenly realized they were protesting their relatives lost to Francos regime, the same regime that had bombed Guernica 70 years ago.
Small battles from 70 years ago still weigh heavily, having left permanent scars....