The Torch Went Past my Home This Morning


The Olympic torch's shadowy past 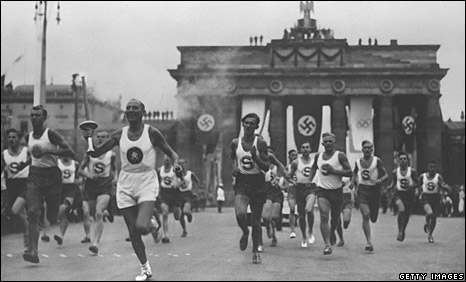 The Olympic torch is being welcomed this weekend in the UK as a symbol of the sporting spirit, uniting people around the world in peaceful competition.

But the idea of lighting the torch at the ancient Olympian site in Greece and then running it through different countries has much darker origins.

It was invented in its modern form by the organisers of the 1936 Olympics in Berlin.

And, on a realted note, one of the not VANOC Cultural Olympiad sponsored shows on display in town during the Olympics is "More than Just Games: Canada & the 1936 Olympics" and "Framing Bodies: Sport and Spectacle in Nazi Germany" at the Vancouver Holocaust Education Centre.